Damray | Home| Information & Guidelines| Editorial Board | About Us

Methods: Twenty patients with post-acute ischemic stroke depressive disorders who were treated in our hospital from August 2014 to August 2016 were enrolled in this study. Twenty healthy individuals during the same period frame for annual physical examination without any diseases were selected as the control group. Both groups received conventional MRI and resting state fMRI (RS-fMRI) scan, images including sagittal T1WI, axial T1WI and rsfMRI images were collected.

Conclusion: Resting-state Functional magnetic resonance imaging technique is effective to detect the abnormal alteration of brain in patients and is of clinical value for the early diagnosis and treatment of post-acute ischemic stroke depressive disorders.

Studies have shown that at least 30-60 % of post-stroke patients have symptoms of depressive disorders. Post stroke depression (PSD) is a serious complication of stroke. It has been associated with reduced health-related quality of life, cognitive impairment, greater functional impairments, as well as increased mortality [1,2]. At present, the clinical studies on depressive disorders after the acute ischemic stroke mostly focus on the pathogenesis and risk factors. However, studies on the PSD using functional magnetic resonance imaging (MRI) as a trail are rarely reported [3]. In this study, using brain functional MRI for 20 patients with post-acute-ischemic-stroke depressive disorders, we characterized the unique features of PSD brain network.

The present study included 20 patients who were diagnosed with post-acute ischemic stroke depressive disorder in the Affiliated Jiangyin Hospital affiliated to Southeast University Medical School between August 2014 and August 2016. Among the 20 patients, 14 patients were male and 6 were female, with mean age 54.2±9.5 (47-78). NMR scan was collected between 4d and 15d (mean 10.9±2.8d) after admission. Patients were included with the criteria of: 1) they were aged 18 and above; 2) they met the clinical diagnostic criteria for acute ischemic stroke [4]; 3) they were classified into the international diagnostic criteria for mental disorders [5]; 4) they were eligible for MRI, yet no other major mental disorders; 5) they had no antidepressant medication. The exclusion criteria were: 1) they had speech disorders or impaired social cognition; 2) they had history of neurological or psychological disorders; 3) physical diseases caused by severe mental illness (SMI) [6]. In the control group, 20 healthy individuals at the same period for annual physical examination without any diseases were selected. Among the health control, 15 individuals were male and 5 were female, with mean age of 58.4±12.3 (31-74). This clinical research followed the ethically justified criteria for the design, conduct and review, as well as received the support of patients and their families with informed consent included. No significant difference was found in age and gender between the 2 groups.

MRI scans were performed on a Philips Achieva3.0TTX imaging system. Patients were instructed to lie on the scanning table facing up and a head foam pillow was used to stabilize the head as well as offer a comfortable position. Patients were then instructed to lie still with their eyes closed while scanning. All patients underwent conventional fMRI scanning including sagittal T1-weighted imaging (T1WI), axial T1WI, T2WI. Resting state fMRI (RS-fMRI) data was first collected with regional segmentation and then echo-planar imaging (EPI) was performed for the whole brain network study.

SPSS 22.0 was used to produce statistical parametric maps. This analysis used the two-sample t test in HRSD-17 and a false discovery rate (FDR) was used to correct for multiple comparisons. The FDR was set at 0.05 i.e. if the t threshold is above 5 % the results were considered false positive, whereas, below 5 % suggesting a statistical significance. 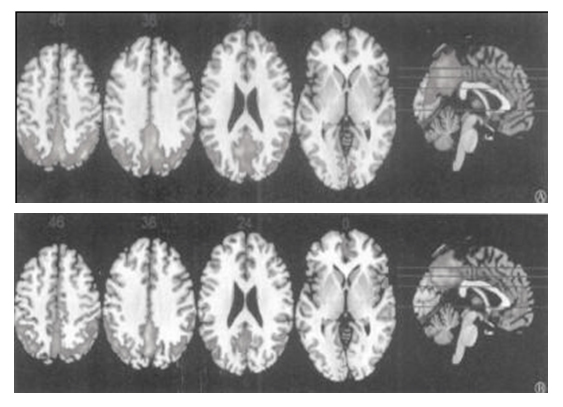 RS-fMRI is widely used in the field of psychological disorders for its advantages of non-invasiveness, no radiation and high spatial resolutions [7,8]. Data analysis of RS-fMRI using ReHo can show both spontaneous brain activity and the endogenous/background neurophysiological processes of the human brain, which, in turn, reflects neuronal activity. Increased ReHo indicates that neurons in brain regions have higher activity consistency, while decreased ReHo indicates its consistency is poor [9]. Clinical studies have shown that certain regions of the human brain, including superior frontal gyrus, middle frontal gyrus, cuneus and posterior cingulate, have higher activity levels at resting state and are associated with intrinsic functional connectivity during rest [10]. Data analysis of RS-fMRI using ReHo on patients with PSD has showed differential expression in multiple regions of brain in compared with healthy human beings [11]. In this study, RS-fMRI is used to investigate the brain function of patients with post-acute-ischemic-stroke depression disorders. As compared to the control group, decreased ReHo was detected in frontal lobe, temporal lobe and parietal lobe whereas increased ReHo in occipital lobe in patients.

Studies have shown that frontal lobe and emotion regulation are closely related. In this case, under resting state decreased ReHo in the prefrontal lobe of patients with PSD suggested abnormal spontaneous brain activities, indicating that post-acute ischemic stroke depression disorder is related to temporal cortex abnormality. In addition, ReHo in left inferior parietal lobule and right angular gyrus of patient group was also significantly decreased in consistent with the finding that, dysfunction of angular gyrus depressive symptoms were as an important part of DMN. Frontal gyrus has been related to patient mental activities, in particular, when dealing with fear, anxiety and sadness among other emotions. In addition, the study found that the cerebellum also had a certain role in human emotional processing [12]. Interestingly, our study showed the decreased ReHo in right cerebellum at resting state of patients as compared with the control group. Our findings indicate that cerebellar dysfunction contributes to the depression phenomenon.

In conclusion, RS-fMRI reveals abnormal regional spontaneous activity involved in brain changes associated with post-acute ischemic stroke depressive disorders, which provides evidence for the diagnosis and treatment at early stage, offering great clinical value. As characteristics to the stoke patients, brain regions with abnormal ReHo found in this study is caused by both the depressive symptoms and cerebral ischemia. Further studies can focus on the effect of cerebral ischemia on the brain activities by comparing patients of stroke with or without PSD.