Damray | Home| Information & Guidelines| Editorial Board | About Us

Objective: To explore the relationships between prenatal risk factors and tic disorders (TDs), and provide an evidence-based medical evidence for the prevention of TDs.

Methods: In the 1:1 matched case control study, 150 children with TDs from West China Second Hospital and 150 healthy children were enrolled, and they were investigated used a questionnaire. The related prenatal risk factors resulting in TDs were analyzed using univariate and multivariate logistic regression.

Conclusion: Pregnant age, childbirth complications, passive smoking, mental stimulation during pregnancy and other risk factors may be associated with TDs. Health education for the disease should be strengthened and the avoidance of prenatal risk factors should be actively advocated to prevent TDs.

Tic disorders (TDs) are common neuropsychiatric disorders in childhood resulted from the interactions of genetics, biology, environment and other factors, clinically characterized by rapid, sudden, involuntary, repetitive and non-rhythmic motor tics and/or vocal tics of single or more muscles [1]. TDs are mainly classified into three subtypes: transient tic disorder (TTD), chronic tic disorder (CTD) and Tourette syndrome (TS)[2]. Global prevalence rate of TTD was 2.99 %, prevalence rate of CTD was 1.61 % and prevalence rate of TS was 0.77 %[3], while prevalence rate in China was approximately 6.1 %[4], which was higher than the data reported abroad.

Etiology and pathogenesis of TDs remain inconclusive. TDs may be triggered by neuro-biochemical imbalance, excessive immune response, genetic abnormalities, psychological factors and environmental factors[5, 6]. In 2014, Chao, et al. assessed the related risk factors of TDs in perinatal period using the method of systematic reviews, and twenty-two assessment case-control studies or cohort studies were included. Their results showed that the smoking and low weight of the mothers during the pregnancy might lead to TDs. There were different results for other risk factors and it should be further confirmed. Therefore, the 1:1 matched case control study method was used in this study to explore the perinatal risk factors of the children with TDs so as to provide more evidence-based medical evidences to prevent and cure the TDs.

A total of 150 children with TDs diagnosed in the department of neurology of West China Second University Hospital from December 2014 to May 2015 were enrolled as the case group, including 112 male patients and 39 female patients. Inclusion criteria: a. children compliant with diagnosis criteria of TDs, aged less than 18 years old, with reference to diagnostic criteria of DSM-IV; b. patients with newly diagnosed TDs. Exclusion criteria: patients with other neuropsychiatric disorders and previously diagnosed TDs and those who were uncooperative in the questionnaires. A total of 150 healthy children who received the healthcare in this hospital in the same period were enrolled as the control group. The subjects of the two groups were matched by 1:1 according to the age and gender, and the age difference was ≤ 1 years old.

With reference to the research status of TDs risk factors, we designed the questionnaires in combination with the specific circumstances in China and through preliminary investigations and repeated revisions. We conducted the face-to-face surveys and collected the relevant data of the subjects or parents that complied with the inclusion criteria. The basic information includes name, gender, age, race, nationality, tic severity, co-morbidity, etc. The exposure factors in pregnancy and intraparum periods include pregnant age, pregnancy reaction, childbirth mode, parity, childbirth complications, perinatal asphyxia and hypoxia, smoking during pregnancy, passive smoking, coffee drinking during pregnancy, mental stimulation during pregnancy, birth weight and gestational age, etc. The tic disorder severity was measured using Yale Global Tie Severityb Scale (YGTSS), which was mainly divided into motor tic scores and vocal tic scores. Following the principle of “respect, fairness, and no injury”, the investigators provided the informed consent to the subjects or parents.

The completed questionnaires were audited and checked and the survey results were entered into the statistical software SPSS22.0. The database was established for a statistical analysis and descriptive analysis of the basic information. The data were tested using Chi square. The influencing factors were analyzed using Logistic multivariate analysis method. The variables were assigned for univariate Logistic regression analysis to calculate the OR value and 95 % confidence interval. Then, all options with statistical significance in the univariate analysis were included in the multivariate non-conditional Logistic regression analysis model for an analysis, with the test level α = 0.05. 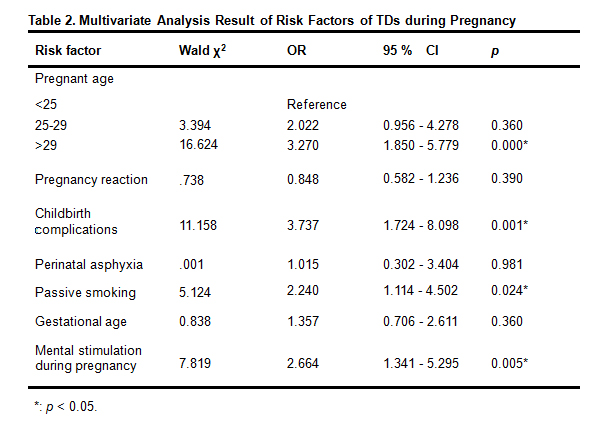 The 1:1 matched case control study method was used in this study to explore the relationship between tic disorders (TDs) and prenatal risk factors in our hospital. After rigorous case selection and data collection, 150 newly diagnosed TDs patients and 150 healthy children in the same period were eventually enrolled in this study. The related risk factors were screened through the univariate analysis. The univariate study showed that pregnant age, pregnancy reaction, childbirth complications, passive smoking, and mental stimulation during pregnancy were the risk factors for TDs. This study has provided a certain reference for the exploration of the causes of TDs in China.

In order to further summarize the risk factors of TDs during pregnancy, the studies of TDs among different countries were compared in this study. Bos-veneman, et al.[8] interviewed the parents of TS children to collect the risk factors during pregnancy by using a cross-sectional survey in 2010. A total of 62 TS children, 12 motor tic children and 10 vocal tic children were enrolled in their study. The study showed that the childbirth and prenatal smoking exposure were the risk factors for TS, which is consistent with some risk factors found in this study. However, they also found that prenatal alcohol exposure, pregnancy complications and antenatal complications at one week were also the risk factors for TS. With the development of Chinese economy and the improvement of living standards, women rarely drink during their pregnancy, while the risk factor of nausea and vomiting severity during pregnancy was not found in our study. This suggests a possible difference of research findings among different populations. In 1999, through the prospective study of gestational risk factors for TS in a way of 1:5 matched case-control study, Burd, et al.[9] found that baby weight, Apgar score, parental age of pregnancy, educational attainment, time for prenatal care, number of prenatal examinations and gestational age were the risk factors, in which, the pregnant age is consistent with the findings of this study. However, we were unable to track Apgar score, time for prenatal care and number of prenatal examinations and other relevant contents due to the diversity of outpatient TDs patients in this study, so we failed to collect the relevant risk factors. Meanwhile, more studies also suggested that high gestational age would increase the risk of TDs[10-12]. In this study, we newly found that the mental stimulation during pregnancy was a new risk factor, suggesting the need for intervention and control in the aspect of prevention and cure of TDs. Foreign studies showed that the mother’s smoking during pregnancy would increase the severity of tic disorders [13]. Smoking is rarely seen among women during pregnancy in China, but the passive smoking sometimes occurs. This study shows that the mothers’ passive smoking during pregnancy is an important risk factor for TDs in children. Therefore, women during pregnancy shall be evaded from the environment with gathered crowds or easy acceptance of passive smoking. It is recommended to further explore the risk factors of TDs from molecular and genetic levels in the future studies[14]. This study has the following limitations: 1) the face-to-face questionnaire was used to inquire the disease and life of the subjects during pregnancy. Because of a longer retrospective time, the subjects may not be accurate enough to recall the information, and therefore, there may be a recollection bias; 2) as for the survey of exposure factors, such as, passive smoking, mental stimulation during pregnancy, coffee drinking during pregnancy, etc., the exposure factors were measured using the dichotomous variables and it was difficult to quantify them, therefore there may be a measurement bias.

In summary, pregnant age, childbirth complications, passive smoking, mental stimulation during pregnancy and other risk factors may be associated with TDs. Health education for the disease shall be strengthened and the avoidance of prenatal risk factors shall be actively advocated to prevent TDs.

This paper was supported by national natural science foundation of China (grant No.: 81373381).