Damray | Home | Information & Guidelines | Editorial Board | About Us

An in-field weed survey method was conducted to estimate the most frequently, density and abundance weed species present in Bilatte tobacco farm, Ethiopia during 2014 totally covered approximately 145 hectares. During study period a total number of 14 weed species belonging to 06 monocot and 08 dicot families were recorded out of 7 families of weed reported form study site. The most predominate was shown by monocot Poaceae having 4 weed species followed by dicot family Composite having 3 weeds. The families Cyperaceous, Solanaceae and Amaranthaceous each having 2 weeds, and the family Papaverceae represented by 1 weed. Based on % of frequency Cyperus esculentus (sedges) family Cyperaceous was 99.30. The data showed that Cynodon dactylon and Digitaria abyssinica belong to family Poaceae and Cyperus esculentus family Cyperaceous were the most abundant weed with a density of 35.9, 14 and 12 of plant m-2 respectively. Relative abundance values quantify the overall weed problem posed by specie Cyperus esculentus that had higher relative abundance was 98.97. The importance value index indicated that Cyperaceous and Poaceae families can be considered the great potential to cause reduce tobacco production. Whereas, Solanium nigrum and Datura stramonium were observed with least population density 0.00 and 1.03 plant m-2, least frequently 2.7 and 13.51 %, least relative weed abundance, 0.07 and 1.03 with importance value index 2.8 and 14.8 occurring weed respectively.

Weeds are a major problem in the tropics as their growth is prolific and they are difficult to control. Weeds can deprive crops of up to 50% of the soil moisture and applied nutrients, leading to reduced yields [1-3]. Weeds are notorious yield reducers that are, in many situations, economically more important than insects, fungi or other pest organisms [4,5].

The impact of weeds on crop production is very significant. Weeds affect crops directly by competing for water; essential mineral nutrients and they are known as a source of different diseases and pests. The extent to which yield is depressed as a result of competition by weeds varies greatly depending on the resources available and competitive ability of crops with weeds [6,7]. According to [8], the presence of weeds in crop areas reduces the efficiency of inputs such as fertilizer and Irrigation water, enhances the density of other pest organisms, and finally severely reduces crop yield and quality.

Among the major a biotic factors limiting production of tobacco in Ethiopia are poor cultural practices and inadequate weed management. Many different types of weeds occur in tobacco farms causes lower yield and quality, increased production costs, interference with harvesting, increase in the spread of some diseases through cultivation, mainly tobacco mosaic virus and leaf curl viruses and cause considerable losses to the farmers and Enterprise fields [6]. The nature of crop, cultural practices and cropping pattern , soil type, moisture availability, location and season have been reported to cause variation in the abundance or distribution of weed species that are found in a cropped field.

A sound weed management strategy cannot be developed without proper identification of weed in the field. Hence, development of a sound weed management program will be crone stone of successful farm operation in future. Currently, the importance of weed on tobacco in Ethiopia is not well documented like other crops. It was, therefore, important to resolve these issues through survey in the major tobacco growing are of Bilatte tobacco farm. Therefore,the present study was undertaken to identify weeds species and their predominance in tobacco fields in Bilatte.

Field survey of mono crops of tobacco conducted on thirty one (31) tobacco fields in two locations Lencha and Toto in 2014 at Bilatte. Bilatte is situated in southern part of the country in the region of southern nation nationalities, Wolaita zone and about 330 km, 80 km, and 50 km away from Addis Ababa, Hawassa and Wolaita Sodo, respectively. Wolaita zone, located about 400 km south of Addis Ababa. Wolaita is roughly divided in two distinct altitudinal zones, the highlands (land between1700-2600masl) and the lowlands (land between 900-1700masl) [7]. Bilatte tobacco farm is found at an altitude of 1200-1400 m. Soil character of Bilatte tobacco farm clay loam 20, silt clay loam 30, loam 45 and 5%silt loam. PH soil 6.6-7.7 [8]. The mean annual rainfall 10 years (2004-2014) was 739 mm and average maximum temperature was 30.5 ºc and minimum 17.0ºc (Table 1).

A total of 31 different tobacco fields representing approximately 145 hectares were surveyed during 2014 (January to February). All tobacco fields were grown tobacco as full season crop to find out the weed flora in tobacco field in which tobacco had been grown intensively for several years in Bilatte. The weed survey was made by least count quadrate method [9] using 1 m ×1m quadrates. In each field, 4 quadrants were laid down and number of each species in quadrant was recorded. Weed Species within each quadrant were pooled, cut close to the ground and then taxonomically identified the name of weed species and their family with the help available literature of standard flora reference book produced by [10,11].

During the survey period 14 weed species belong to 7 families were recorded. The weed flora includes broad, narrow leaved, grasses and sedges. The most representative family in study areas, with regard to the number of species, was poaceae (4) followed by composite (3), Cyperaceous (2), Solanaceae (2), Amaranthaceous (2) and Papaverceae (1) (Table 2).

The result of frequency of weeds observable that Cyprus esculent (sedges) was the most frequent weed in the surveyed farms with 99.30 percent frequency. The next frequently occurring weed species were Sorghum halepense, Digitaria abyssinica , Xantinium Spanijum, Cynodon dactylon, Cyperus rotundus, Digitaria scalar, Amaranthus hybrid, Amaranthus blitoidies, Argemena Mexicana, Chondrilla juncea and Gaslinsoga parviflorara, with frequency percentages of 72.39, 67.57, 64.86, 56.76, 40.54, 40.54, 29.73, 27.03, 16.22, 21.62 and 21.62 respectively (Table 3). The frequency of remaining Datura stramonium and Solanium nigrum were recorded less. The weed species with low frequency may, in some cases, ignore the application of herbicides for the control in the whole area, as normal occur in focus and thus local control method development (Table 3).

The relative weed density percentage of weed is also data show that Cynodon dactylon was the most abundant weed with a density of 35.9 of plant m-2, Digitaria abyssinica second most abundant weed with density of 14.0 plant m-2, Cyperus esculents, Xantinium Spanijum, Sorghum halepense, Cyperus rotundus, Digitaria scalar, Amaranthus hybrid and chondrilla juncea, were the other weed density over 3.2 plants m-2 and the reaming weeds were not present at a larger extent.

The importance value index indicated which species have great influence within field. Cyperaceous (210.30 and Poaceae (104.3) families can be considered a trouble species with the great potential to cause reduce tobacco production (Table 3). This fact high lights the need for strategies this species in all areas of study, because if not controlled properly, besides competing for water, light, and nutrients can interfere with harvest and be host to aphid that cause Bush toppy virus disease a major challenge in tobacco production in study area. 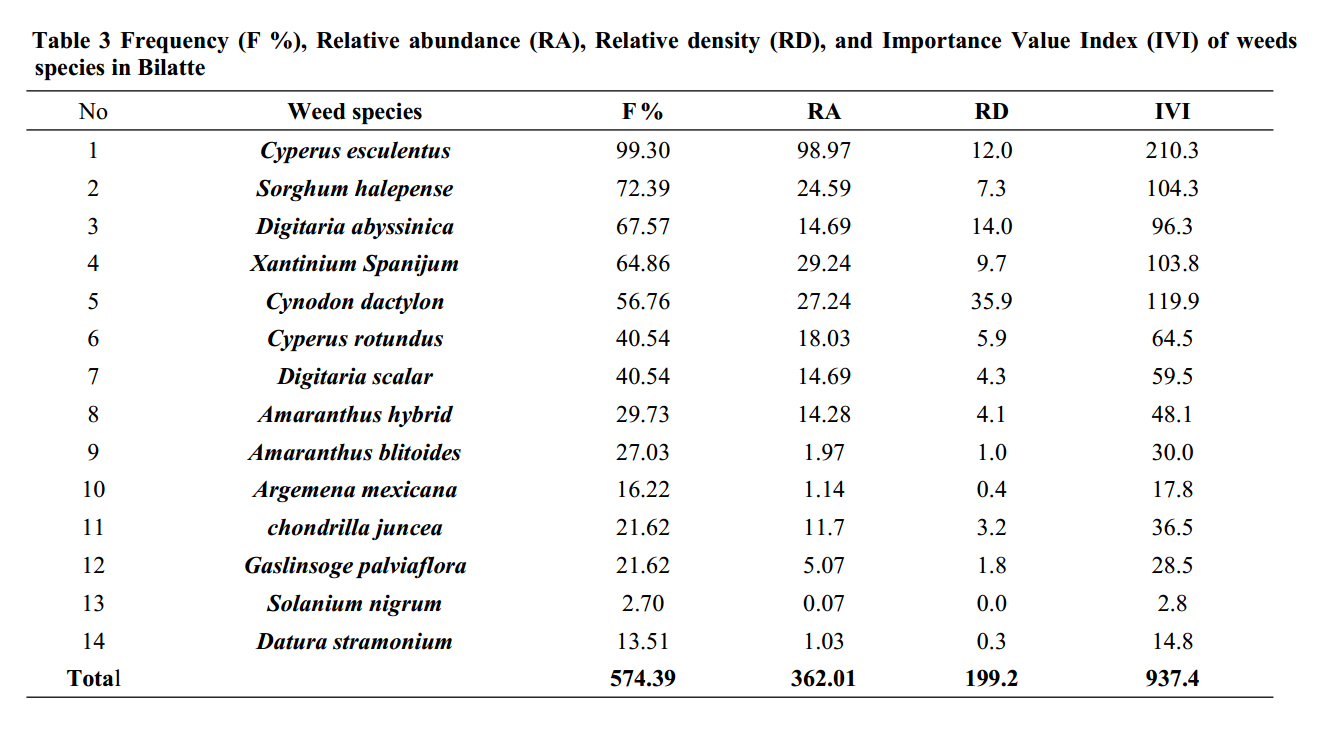 Based on the survey of this study, the following conclusions were made: